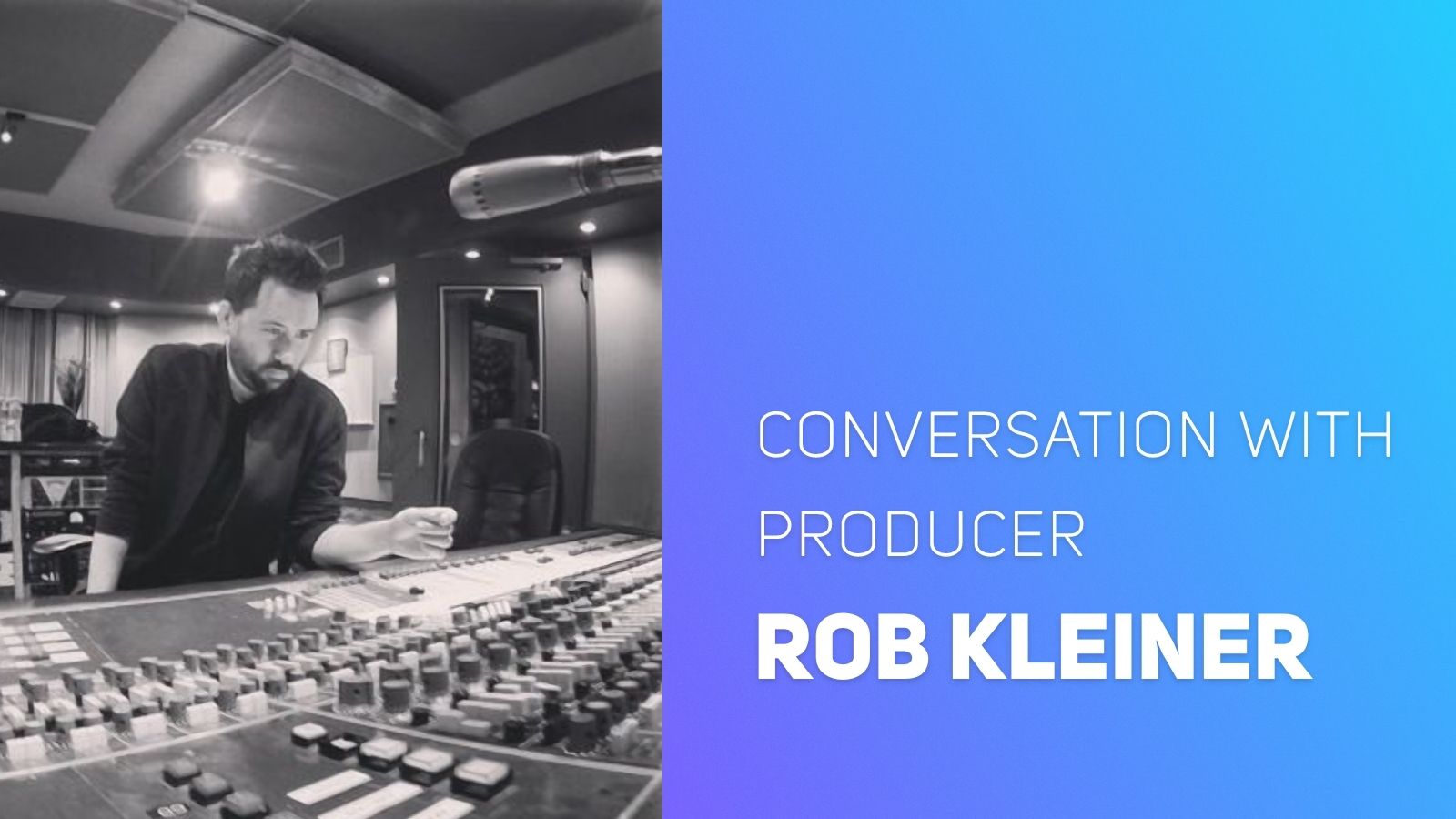 With a thriving career which includes collaborations with artists such as Brittney Spears, Sia, Quincy Jones, Labrinth, Cee Lo, and LP, Rob Kleiner went from being a starving artist to receiving multiple awards including a GRAMMY nomination for Album of the Year in 2015.

Rob generously agreed to talk to us and recently tuned in from his studio in Los Angeles, CA to give us some valuable insights on his creative process and as well as his journey to success.

How did you start in music production?

Music became an intense passion pretty early. When I was young, I wanted to live in a recording studio. I loved listening to albums, and I wanted to make albums every day. At first, I kind of avoided becoming a producer because I was really focused on songwriting... But then I always spent so much money paying going to studios, I realized pretty early on that I wouldn't be able to afford always paying for a studio every time I wrote a song. I needed to learn how to do this on my own.

When did you feel there was a shift from being a struggling artist to someone more established in the industry?

Over time, you end up getting a lot better at these things! Obviously, the first song I wrote wasn't great, but the 100th was a little better, the 500th was better than that. The same goes with production, mixing and mastering, and these skills usually come from necessity.

Were you self taught or did you take the academic route?

I studied a little bit of music production at college, but not that much. Every time I was in a studio I was paying for, I watched and I asked lots of questions. Then, going further in the process, I had a few producers' phone numbers on speed dial. These were people who knew this stuff better than I did, so if I ran into a roadblock I’d ask “how can I achieve this sound?” and they'd give me some insights.

When did you start working with technology for creating music, and what was it like when you started compared to where technology is today?

I probably started getting serious about production in 2004-2005. I always had the classic dilemma between buying “this really expensive thing", or "this cheap thing”. I didn’t have any money back then, even to buy the cheap thing! But I knew that if I didn’t get the gear, I wouldn’t get the sound I wanted.

Today, the stuff you get free when you buy Logic or Ableton, or any of the DAWS, it’s just awesome. It gets people thousands of dollars ahead. You don’t have to have that much money to make something sound great these days, you just have to be creative.

What are some of your favorite tools?

I love Fabfilter Pro-Q 3, the holy grail of all EQs. As for Compressors, I love the UAD 1176. For instruments, I’m a big fan of Omnisphere, I use it a lot. Also, Labrinth introduced me to Pigmints Arturia, which is really great. Kontakt is a really nice Swiss Army knife for lots of different things. As for effects, I love Yum Audio and Baby Audio. For vocals, VocAlign is really key. Gullfoss and Soothe are two of my favorite mixing plugins, I use them all the time. I also love saturation plugins, I have a million of those for a million different things. I use WAVE ones, UAD ones, to name a few.

What about lofi music?

What’s great about a lot of the Yum Audio plugins is that, even if you’re not going full-on lofi, it brings a sense of what we all grew up with, a sense of warmth and imperfection.

Especially, electronica as a genre is so stale and so boring to me, unless you’re using stuff like that. You need some type of human element. Before, I used to try to include little mistakes on purpose for that. Now, I can manipulate the sound with a little Pitch Dropout, or a Tape type of warble. Being able to achieve some of these things with just a few clicks, to me, is a great alternative.

Can you tell us what your creative process looks like? Let’s say a record label contacts you to produce an album. What happens from there?

What usually happens is that a few weeks later, I get a knock at the door and I have an awkward moment with an artist when we say hi, have a small coffee, and go to the studio to try to come up with something awesome.

A lot of the times, you don’t. You never know if you’re gonna get along, if you’re gonna have the same tastes, or if you’re gonna be on the same page. But every once in a while it turns out great and it can become something amazing. Then maybe from there, you keep going and hopefully make a bunch of hits!

Do you prefer with someone who has a clear idea of what they want or someone who comes with a clean slate?

There’s no right answer to that. Someone who knows exactly what they want can be helpful because I can know how to get what they want. On the other hand, if they don’t know what they’re looking for, since I consider myself a songwriter more than a producer,  I’ll probably come up with an idea and sing a hook or something and see what happens from there. I actually start a lot of sessions that way.

I also love it when an artist comes in and says, “I’ve always loved this song” or “I’ve always wanted to make something similar to this” talking about either the vibe, the structure, or the concept of the track. Having something they’ve always loved and want to put their stamp on is a great way to start a session as well.

Are you also recording and publishing your own music?

I record some of my music for fun, and don’t put any effort into marketing it. I’m mostly focused on other artists’ materials, and I like that. One of the things I struggled about being an artist was that you must keep an identity and many times, it becomes an obligation. Maybe at some point an artist wants to express something totally new, but unfortunately they're painted into a box.

Of course, some artists break that, but for me it was tricky because when I wanted to reinvent myself, there were limitations. I found that being a producer allows you to be different things on different days.

What was the moment in your career that you went from being an unknown artist to having a breakthrough?

I could tell this story in two ways: I was a starving artist one day, and then I wrote a song which Cee Lo recorded, it starred on the soundtrack of one of the Twilight movies, and the next day I wasn't a starving artist anymore. That short story sounds like overnight success.

The long version is that there was a decade of trying to make those opportunities happen and literally having a $5 budget to eat a day. So of course, it was a gradual process. I guess the moment that snapped for me was getting my first big major label cut with Cee Lo but many years went into making that happen.

Along the way, one important mindset I had was “I need to be making music”. I didn’t care about having only $5 to spend for eating. This was 12 years ago, and if I was still a starving artist now, I’d still be doing the exact same thing. That’s how important it was for me to be making music. It’s great that it changed, but I would’ve never given up. I knew from an early age that this was for me and music was what I wanted to be doing with my life.

Do you have any "words of wisdom", or advice for people who are in this position right now?

Will you be ok with it taking 10, 15, 20 years? If the answer is yes, then this is absolutely what you should be doing. I hope it doesn’t take that long for you, but that is the attitude you need in order to make it work.

I think when you spend enough time at anything, when you get really good at something, you become a commodity, and what you are doing becomes needed. You become the guy people need for that kind of thing. It can be a hard road, but if it’s your dream, it should be a hard road, and it will be worth it.