An Easy Guide to Understanding Scales and Chords 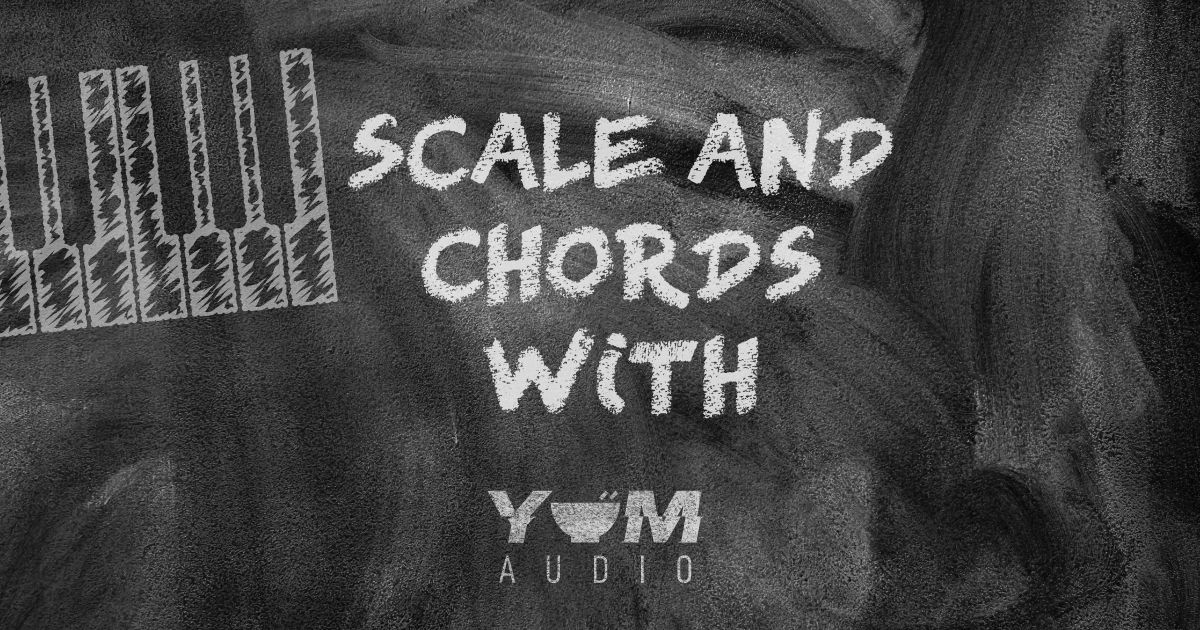 Ah… music theory. Two words that can make some musicians react like 6 year-olds when parents ask them to finish eating their veggies — it just doesn’t sound fun. And why, oh why, would anyone bother with that if we can just open up a DAW, fire up some cool synth with a couple of great plugins, and just start making some beats.

It’s true, you don’t need music theory to make great music. Many great musicians and producers, even highly creative and professional ones, don’t have a solid understanding of music theory and this doesn’t take anything away from their work.

That being said, there can be some advantages in understanding music theory better. The major one is probably reducing the time in trying to understand what kind of music ideas work or not, and why. Understanding the formation of scales and chords is a big part of laying down a fundamental understanding of music theory so, in this post, we’ll attempt to demystify this with concise explanations and clear examples.

What is a scale?

There are fundamentally two ways of looking at the way music is organized. You can think about music on a horizontal level, which means everything that has to do with melodies or bass lines (which are just another type of melody, really), or on a vertical level, which is what we call harmony.

Rhythm, if you think about it, would also be part of understanding music horizontally but we won’t be touching on that in this post.

Scales, in their essence, represent a horizontal organization of sounds. Each scale is a defined structure built with a succession of whole steps and half steps. When we understand what the underlying structure is, we can recreate the same kind of scale using any note as a starting point.

Each scale is built using a combination of two “micro-patterns” called tetrachords. It’s the combination of these tetrachords, and the specific way they are linked together, that creates a bigger well-defined pattern we call a scale.

Let’s deconstruct a C Major scale to understand this better. 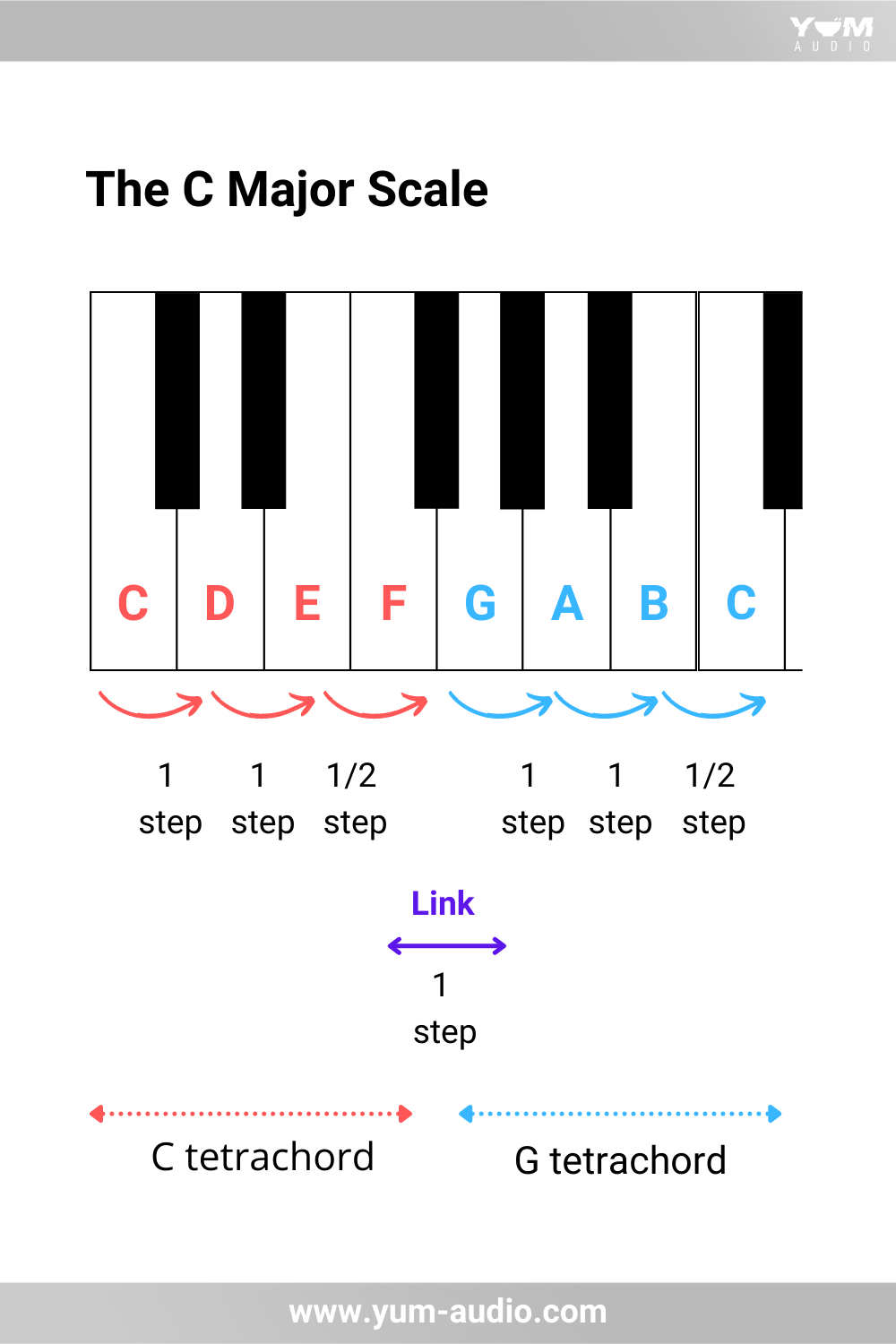 We can see by the succession of steps and half-steps how a major scale is organized:

Now that we know this structure, we can apply it by using any note we chose as a starting point for building a major scale. For example, let’s build a major scale starting on Eb. 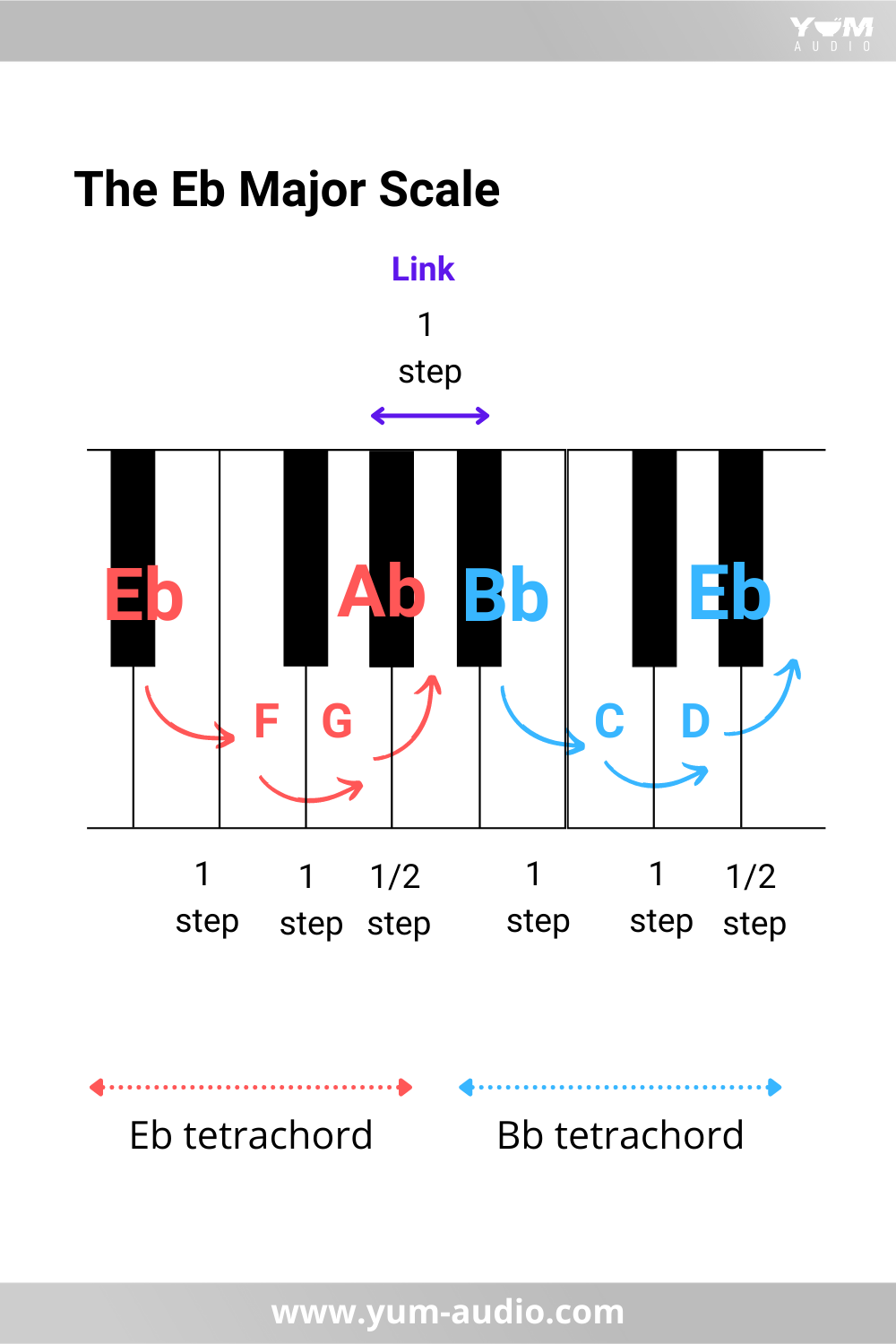 Even though we are now mixing white keys and black keys on the keyboard, we can see that the underlying organization of the scale is the same:

There are hundreds of scales to play around with if you count all the different kinds of scales you can find in different cultures. But as a very basic start for Western classical music and jazz, here are the most common ones and their underlying structure.

There are two forms of the minor scale widely used in both classical music and jazz: the melodic minor and the harmonic minor.

Note: In reality, there are three forms of minor scales, the third one being what we call the “ancient minor” but that one is not as widely used and the reason why it exists is slightly outside the scope of this post.

The harmonic form of the minor scale is used mostly, as its name indicates, in a harmonic context. The melodic minor is used when using the scale to build melodies, riffs, or improvisations.

Both types of minor scale share the same first tetrachord and the same link pattern:

The difference comes in the second tetrachord. The harmonic minor’s 2nd tetrachord follows this pattern and is equal going up the scale as it is going down:

The 2nd tetrachord of the melodic minor, on the other hand, is slightly trickier because it has a different pattern going up than going down. Going up, the pattern is the same as in the tetrachords we find in a major scale. Going down, that pattern is reversed.

Let’s take a look at both these types of minor scales starting on C. 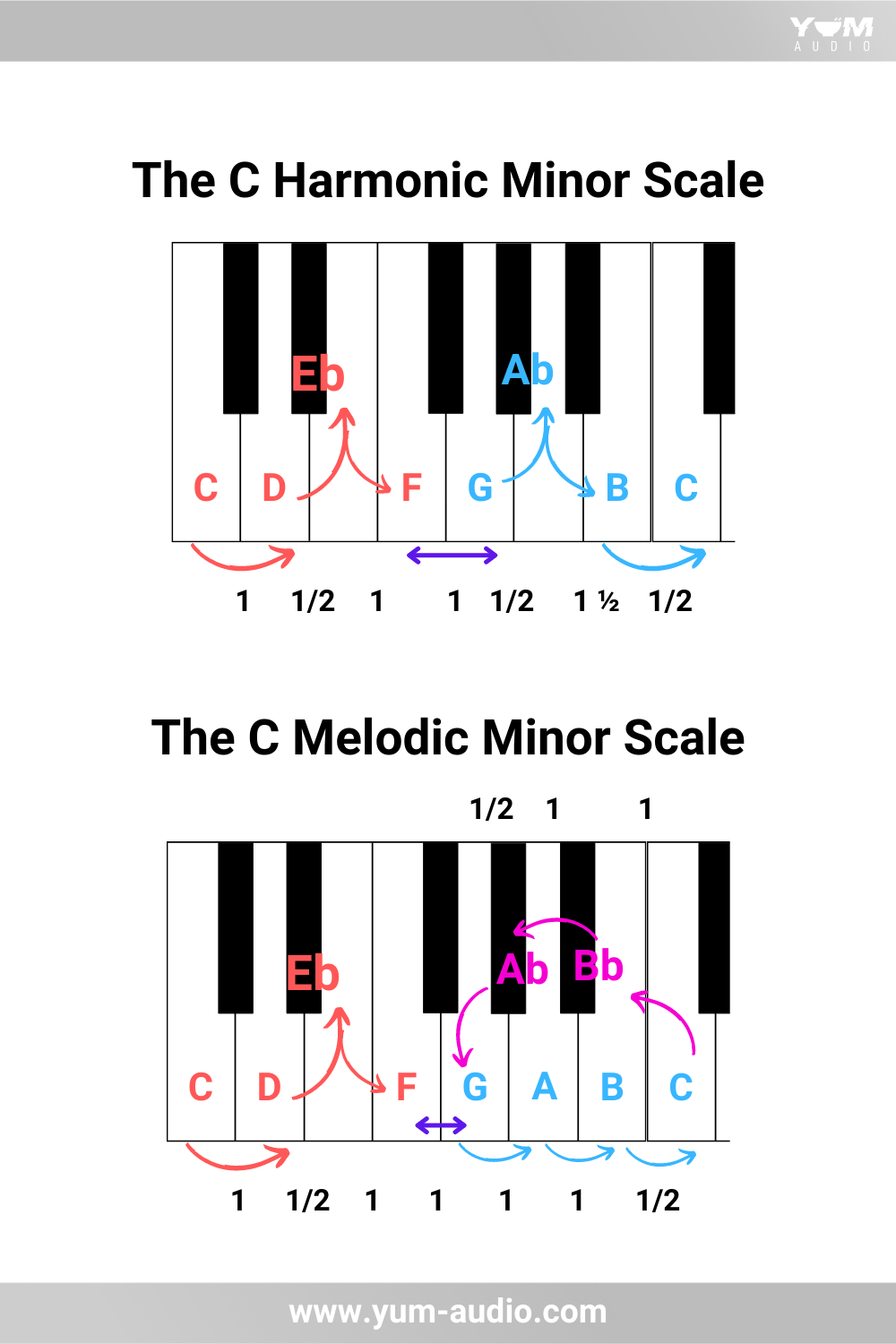 The pentatonic scale is a very widely used scale in pop music. The reason why it’s called “pentatonic” is that it basically contains only five sounds. It comes in two different types, the Major pentatonic and the minor pentatonic.

Here are the complete patterns for both types of pentatonic scale. 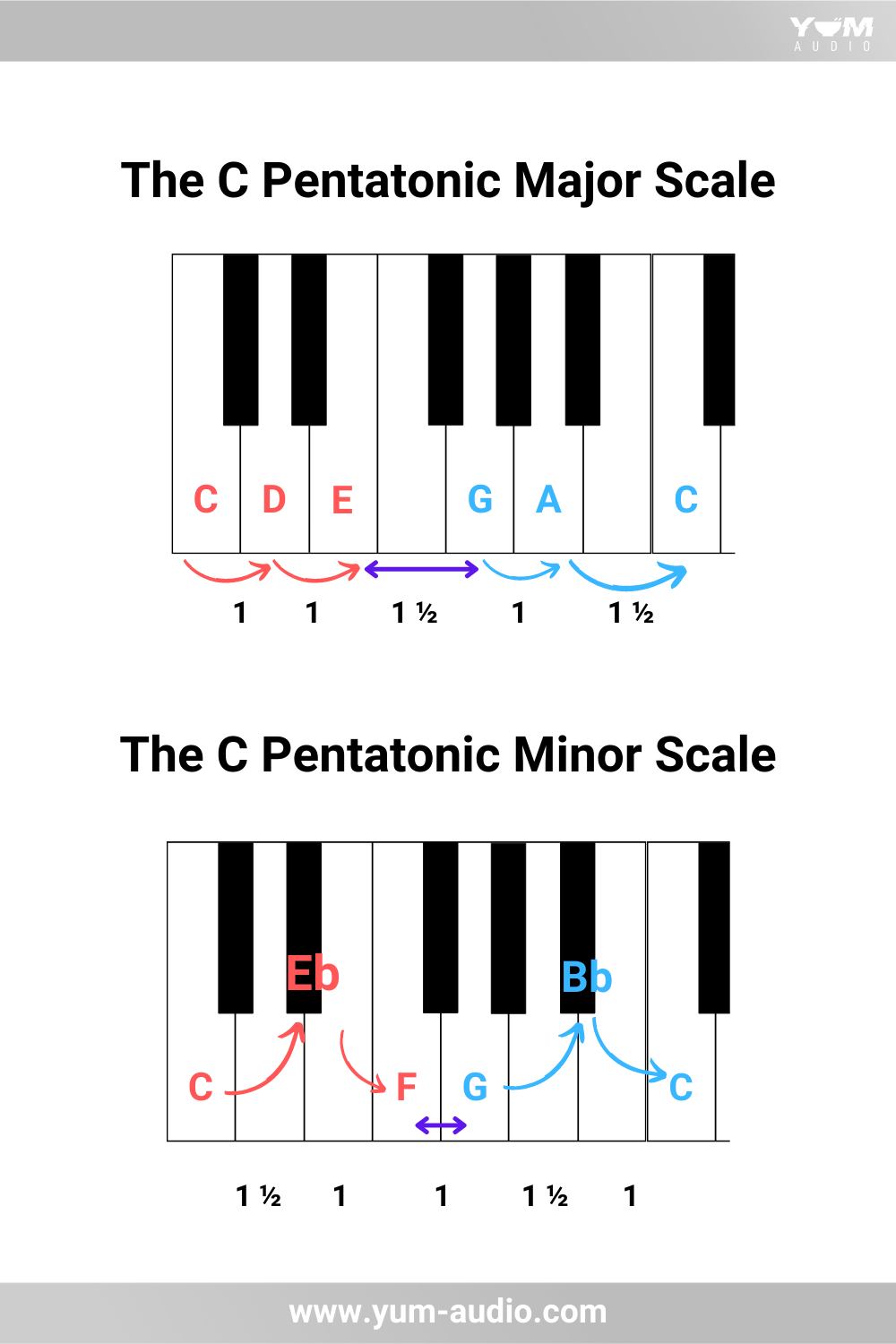 The Blues scale is very popular and is usually one of the first types of scales we learn when we start improvising at our instrument. Blues scales are basically a variant of pentatonic scales. The pattern for both types of scales is identical except that the blues scale gives us an extra color by adding an optional passing note in the pattern.

A passing note is simply a tone we add on our way to another tone. We can add passing notes when we want to play a whole step but break it down by playing that in-between note as well.

Passing notes are not inherently part of the scale pattern. That’s what’s happening in the Blues scale: the additional note gives us the option for an additional color but we don’t need to play it every time, we can choose the moments we add it into our improvisations.

In both the major and minor Blues scale, we can break the second whole step coming in our pattern by adding that passing note in between. 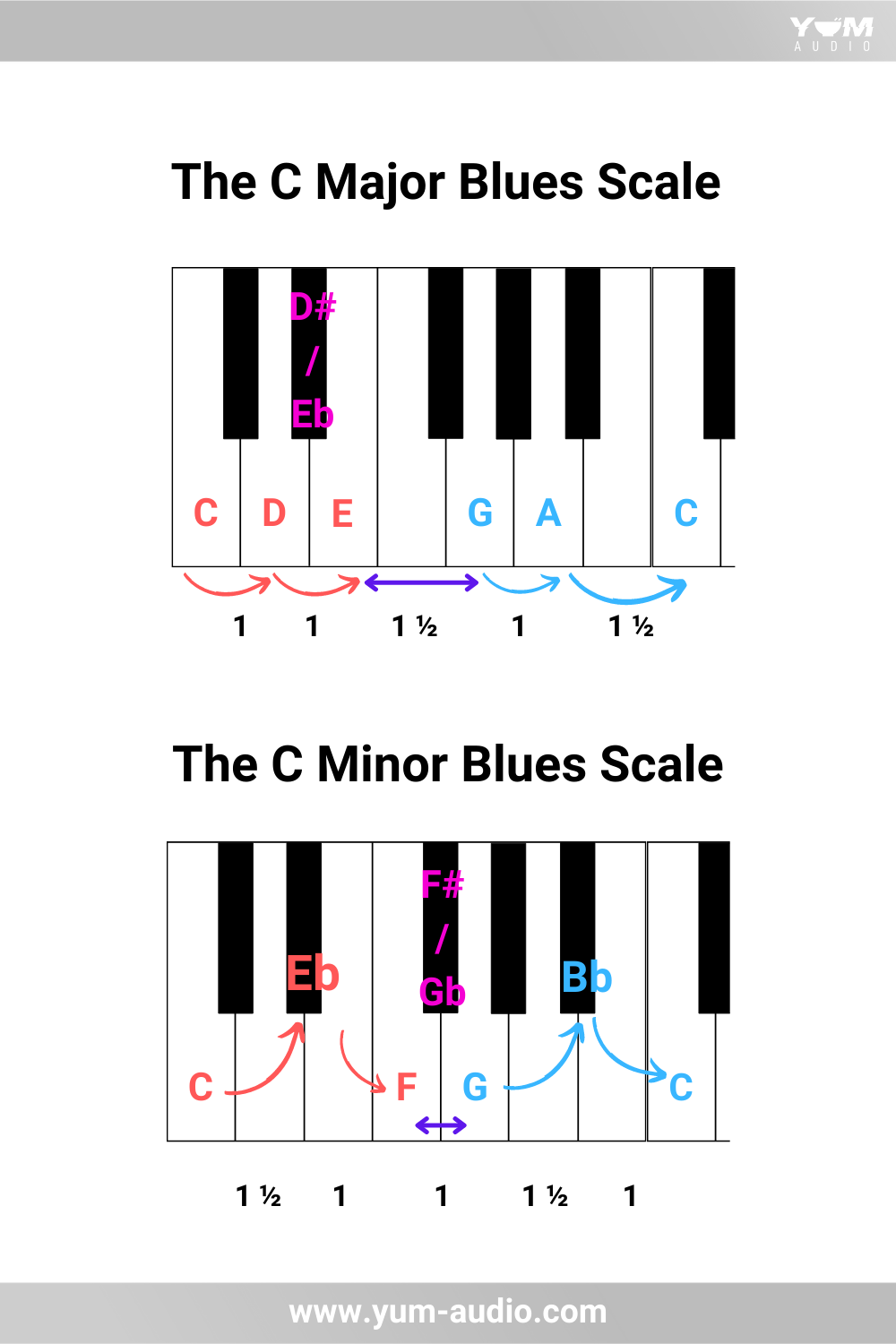 Chords are simply a way to organize scales vertically. A chord is built using what we call triads — a music interval that goes from one note to another by skipping a note in between.

A basic chord is made out of 3 notes found by superimposing 2 triads on top of each other. In reality, many chords use much more than 3 notes and it’s possible to find these more complex chords by superimposing as many triads as we wish, but this is slightly outside the scope of this article.

A major chord is created using first a major triad and then adding a minor triad. A minor chord is created by doing the opposite. If we know in which key we’re in, we can simply make sure the notes we use in our chords are part of the scale. This will create the right arrangement of triads naturally.

Consequently, I can do the exact same thing for creating a minor chord. To create a C minor chord, I can think about first creating a minor triad starting from C — this takes me to Eb — and then a major triad from there — taking me to G. But if I already know the notes part of the C minor scale, I’ll naturally know to play an Eb instead of E because I’ll know that Eb is part of the C minor scale, while E natural isn’t.

Another type of chord important to know is the diminished chord. This kind of chord is built by superimposing 2 minor triads.

A good exercise is to try to build a chord on each note of a scale using only the notes of that scale. You’ll then see different kinds of chords appear simply by superimposing triads.

Check out the diagram below for an example using the notes of the first tetrachord of the C major scale. If you don’t understand why the chords are defined as major, minor, or diminished, try counting the number of steps or half-steps in each triad and notice the difference in the patterns. 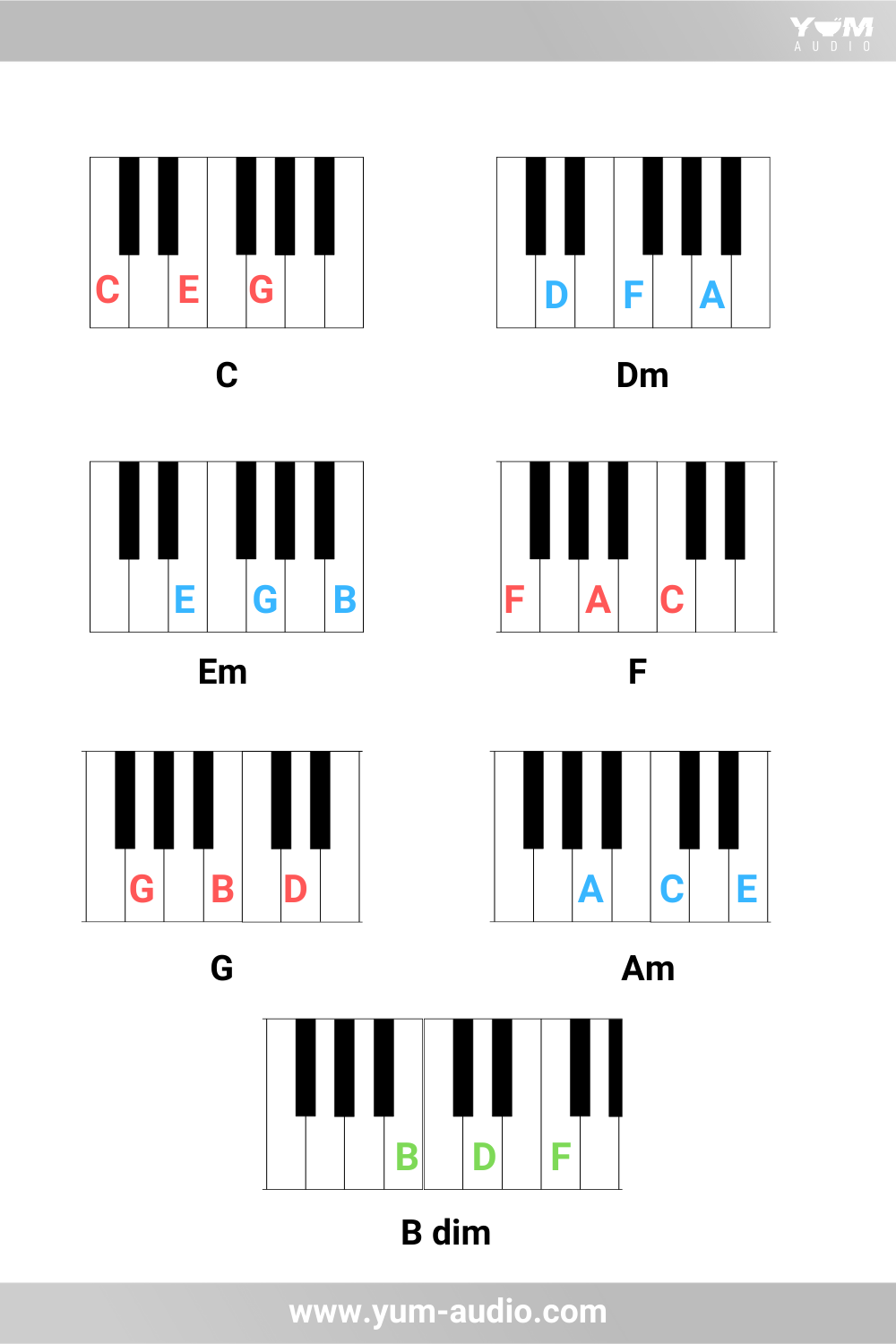 If you’d like to practice a bit, try doing the same with the C harmonic minor scale. Here’s a blank image you can use, right-click on it to download it and save it on your computer. 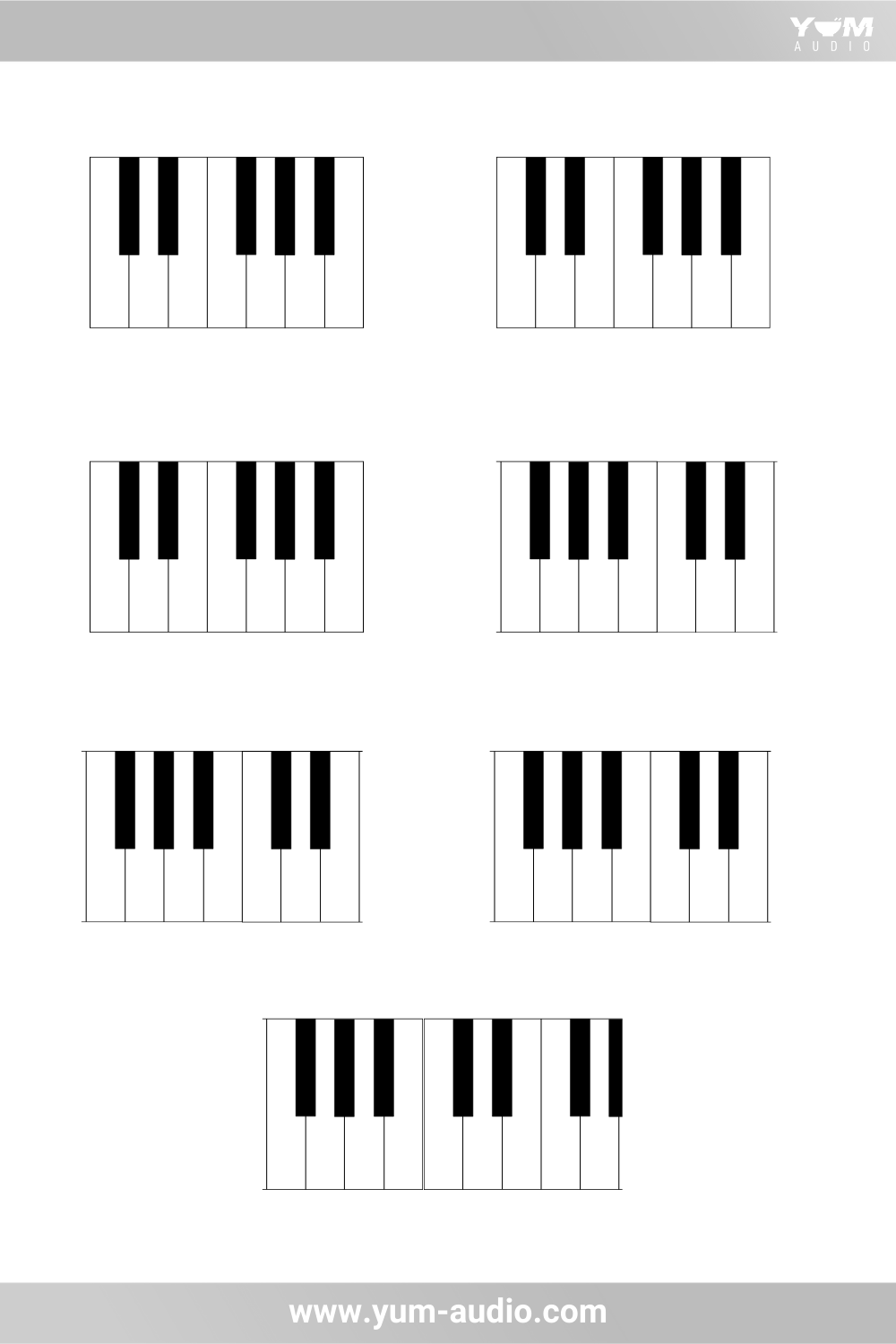 Going from theory to practice

Bridging the gap between understanding music theory and using it in a practical context takes some time, practice, and patience. But the more you grow your understanding, the quicker and easier you’ll be able to point out why some of your ideas work and some others don’t.

You can compare the knowledge of music theory as a flashlight illuminating the path when walking somewhere dark. Sure, you could probably find your way without it and simply let your eyes naturally get used to the darkness, but having a flashlight definitely makes it easier to figure out what the way is.